Oshima Shipyard is a factory that can efficientlybuild bulk carriers of 30,000 to 100,000tons

Factory buildings are arranged in a line which follows the production process. Each process is completed in each factory building, and the processed steel plates and blocks are transported to the stock area. This stock area serves as a buffer for process adjustment. In the buildings for block assembly, blocks are categorized and workers can do their job at fixed position using work cart on the production line, and it is designed to make work arrangements done efficiently.

The simultaneous construction of four vessels at the dock, a feature of Oshima Shipyard, is a construction method that can be realized only with our huge stock area. Blocks are assembled for each vessel, but in the construction stage, two units are constructed in parallel. Therefore, a space is required between the assembly and the construction stage where blocks for up to two ships can be stocked. And we have a stock space that satisfies it. 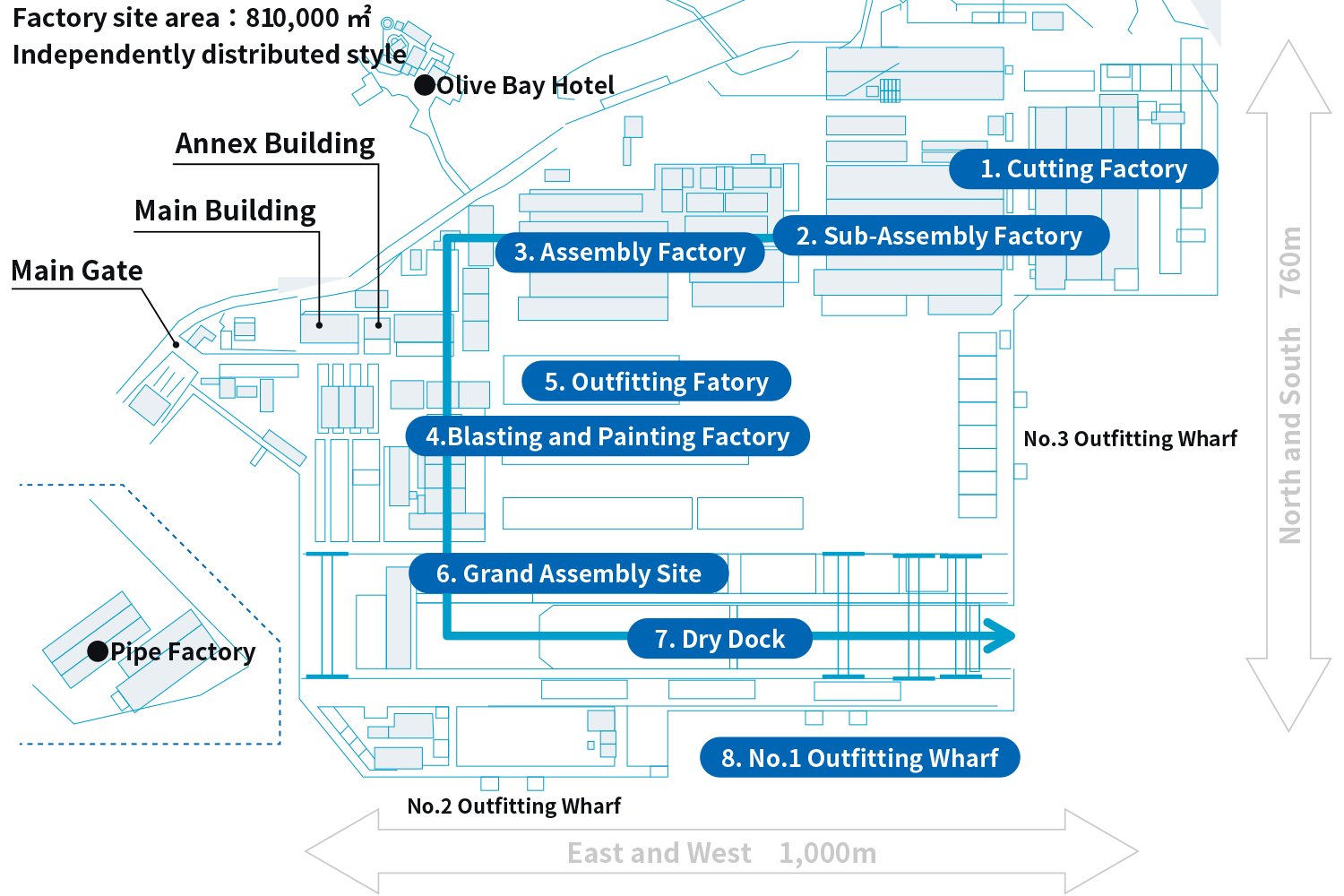 Unloaded steel plates and profiles are cut into parts here. The maximum size of steel plate is 22.5m in length and 4.5m in width. Steel plates are cut with a NC plasma or laser cutting machines. Each ship has about 50,000 parts. 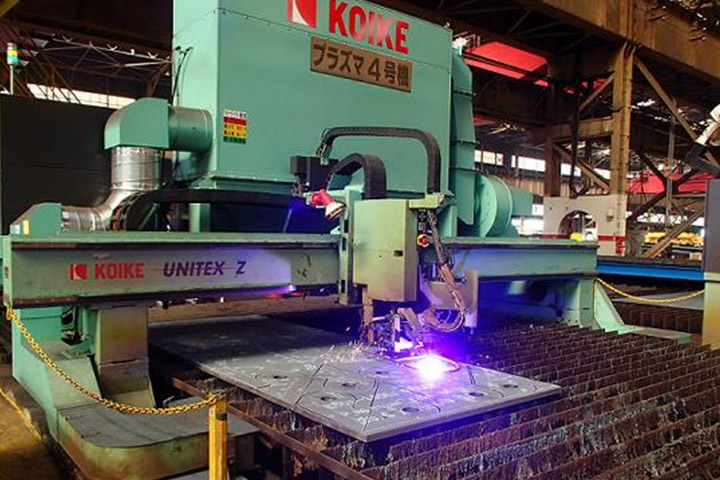 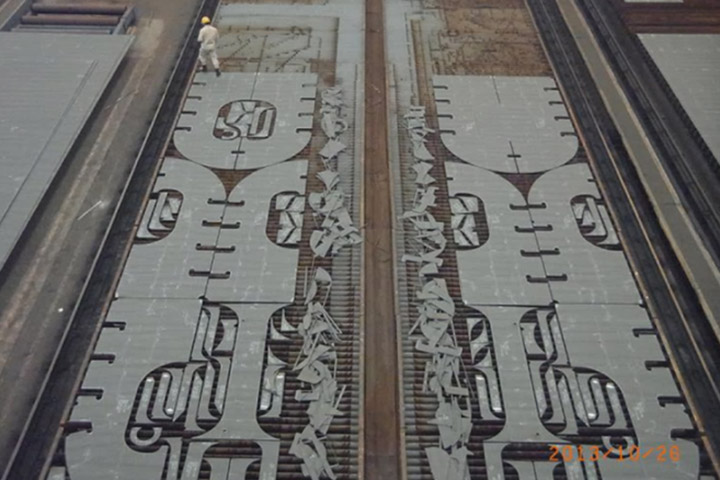 At sub-assembly line, small and middle sized blocks are assembled by combining cut parts. The blocks are categorized and assembled on a designated assembly line. The manufactured blocks are transported to the next process by carrier. In addition to block assembly, we also work on bending plates by press machines and burners. 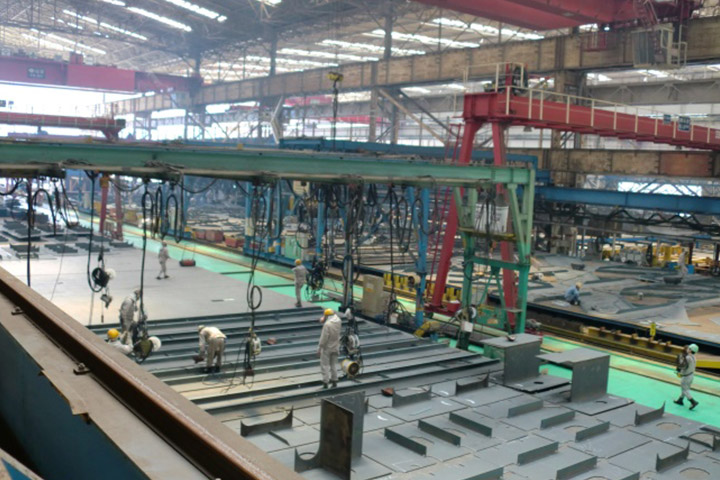 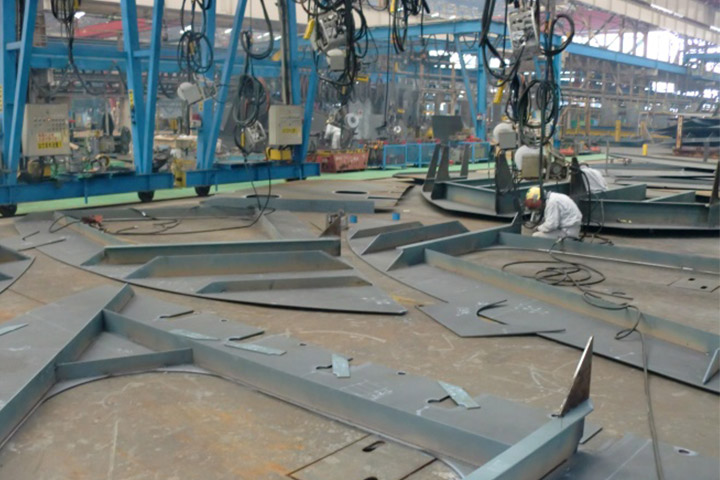 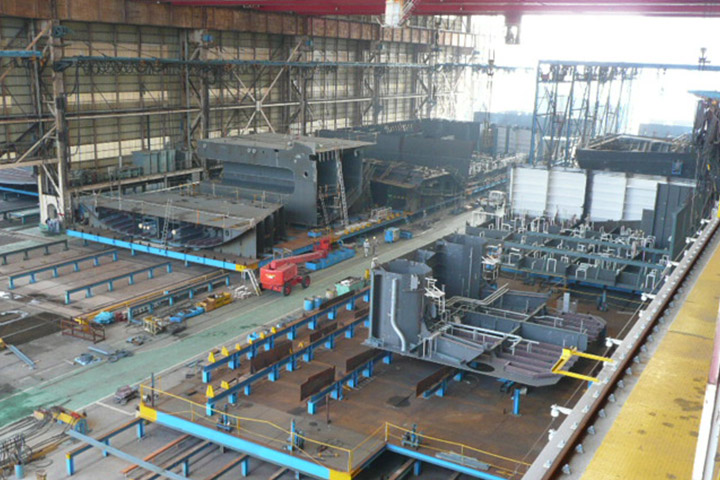 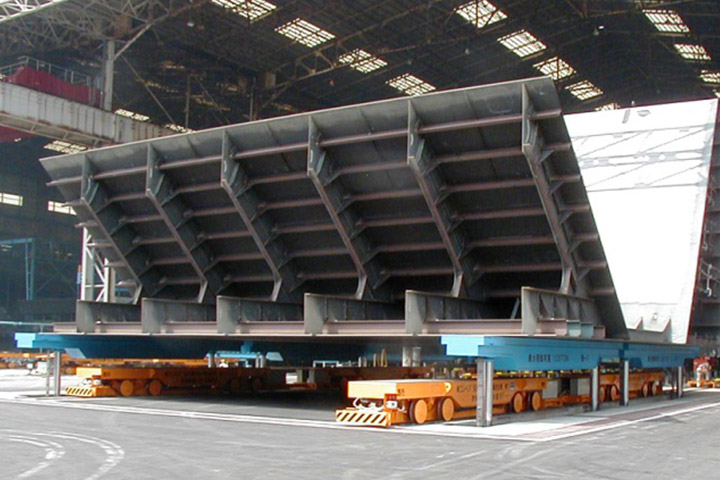 At blasting and painting factory, blocks are blasted and painted. Blasting is the work of spraying small iron powders called grit by compressed air to clean the plate surface. Because control of temperature and humidity is important in painting, painting factory building has sliding doors and dehumidifiers. 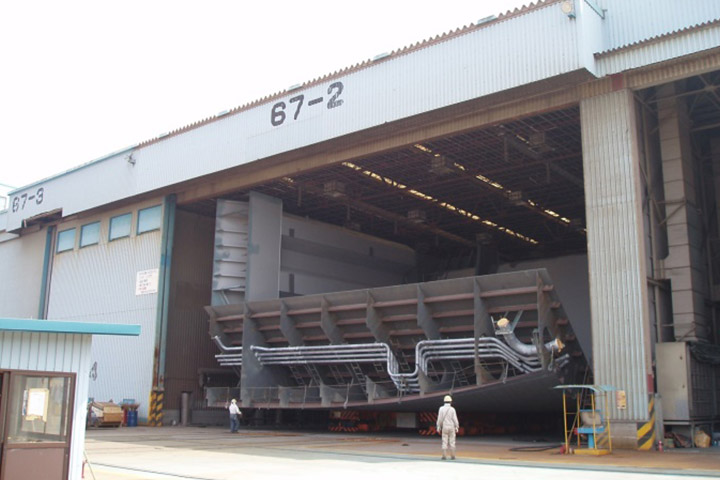 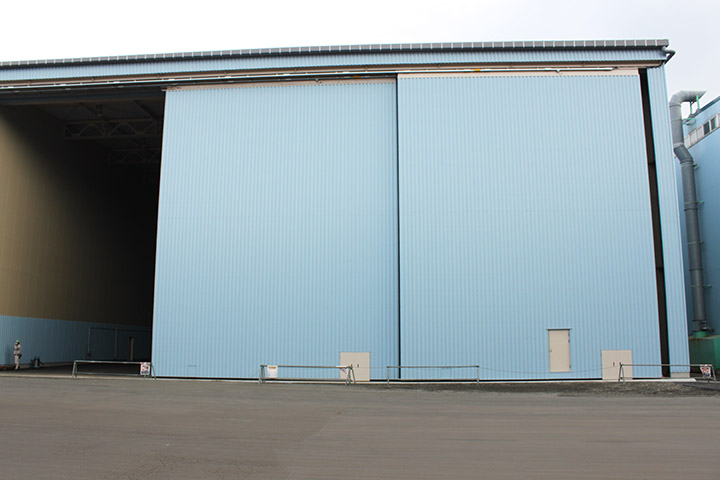 At outfitting factory, pipes and electric cable are installed to blocks such as engine room. We carry in blocks and install pipes and cable in advance where possible. Some blocks are inverted to improve posture at work. 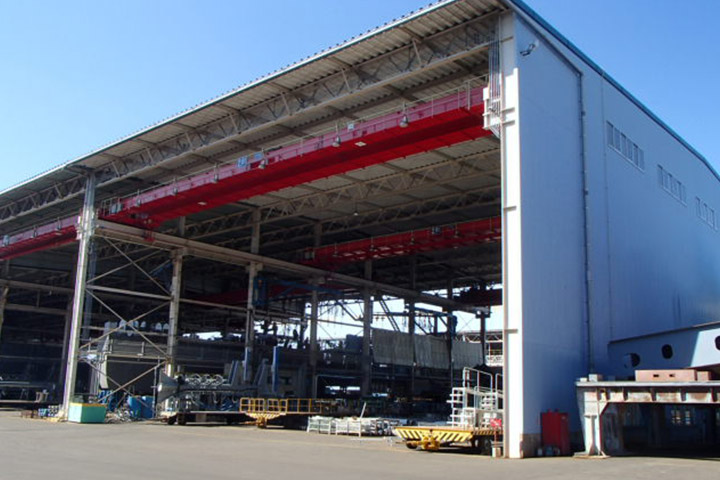 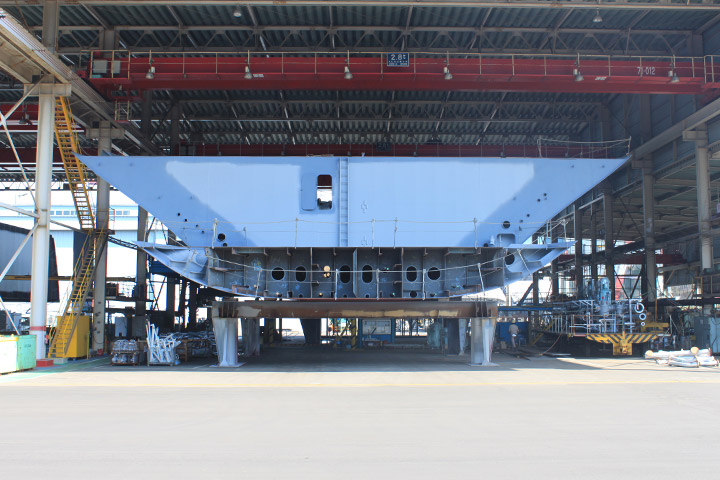 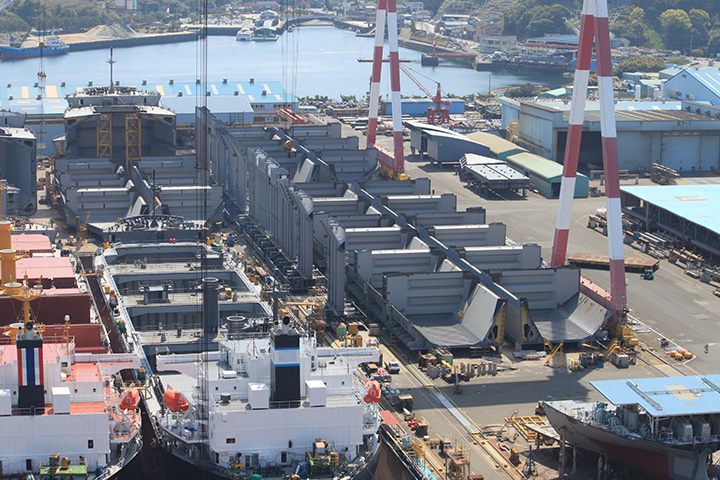 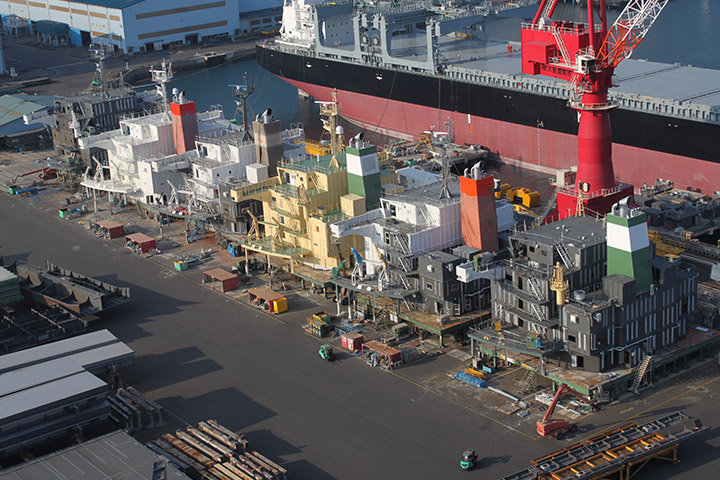 The dry dock is where the hulls are constructed from grand assembly blocks and launched. The dock is 535m long, 80m wide and 13m deep. We construct four ships, a set of 2 ships is built in parallel, and another set is placed longitudinally for simultaneous construction. Two ships in a set launch at the same time. 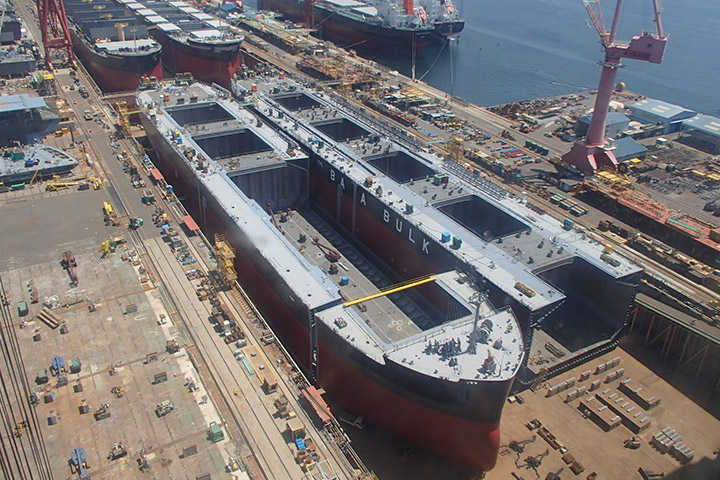 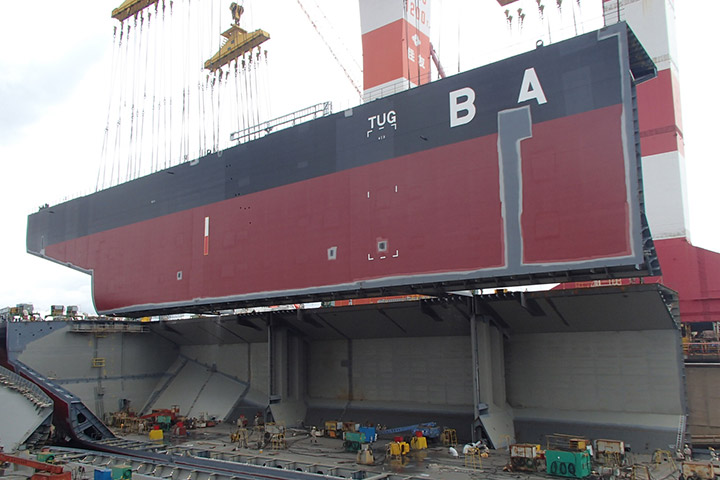 At outfitting wharf, the equipment on launched ship is operationally adjusted and the final painting of the deck is done. After the adjustment of the equipment, a sea trial is performed to confirm that the equipment operates as designed and satisfies performance in the specification. After completion, a naming ceremony is held at No.1 Wharf and delivered to the ship owner. 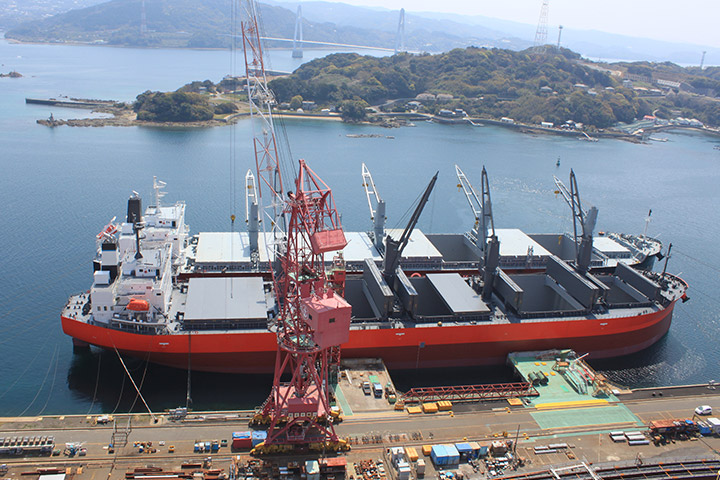 A ship being a large and complex structure, it cannot be constructed in a trial and error method.
The design department uses 3D-CAD so the ships can be built efficiently on site.

A 3D model of the hull is generated during the initial design stage, and initial scantling check and the structural arrangement, extraction of 2D CAD for drafting of Key Plans, and estimation of hull weight are carried out. This 3D model is converted to an FEM model which is used for Structural Strength analysis thereafter. By carrying out an FEM analysis and followed by a simulation on 3D model it is ensured that the designed structure is safe enough to withstand the assumed navigational conditions that ships will encounter over the course of their lifetime and applying the most severe and stringent strength conditions. 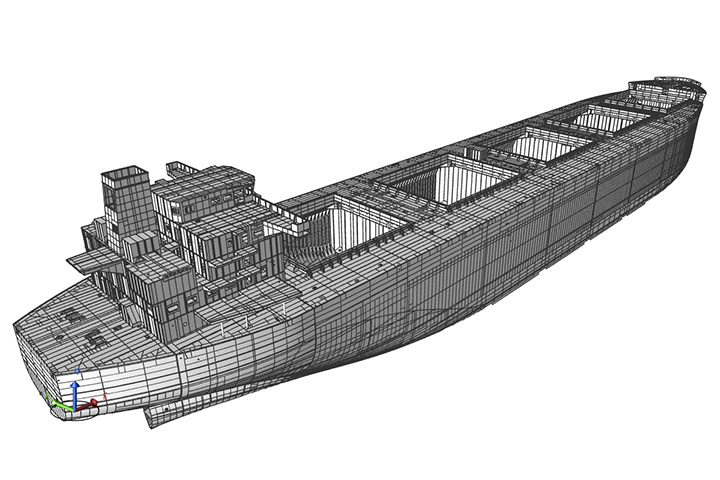 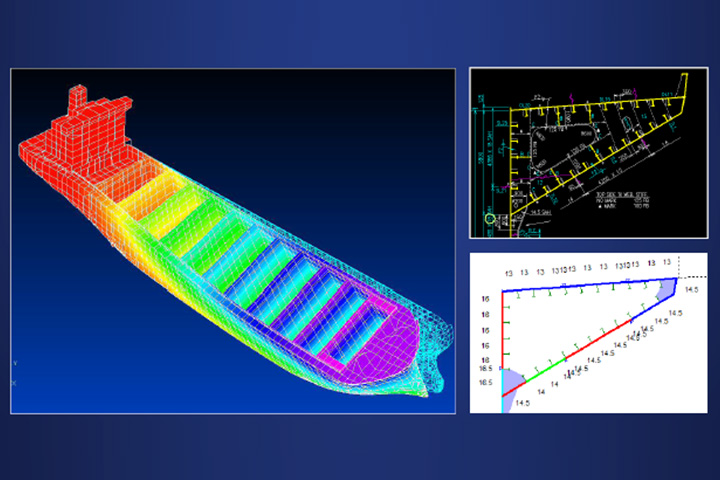 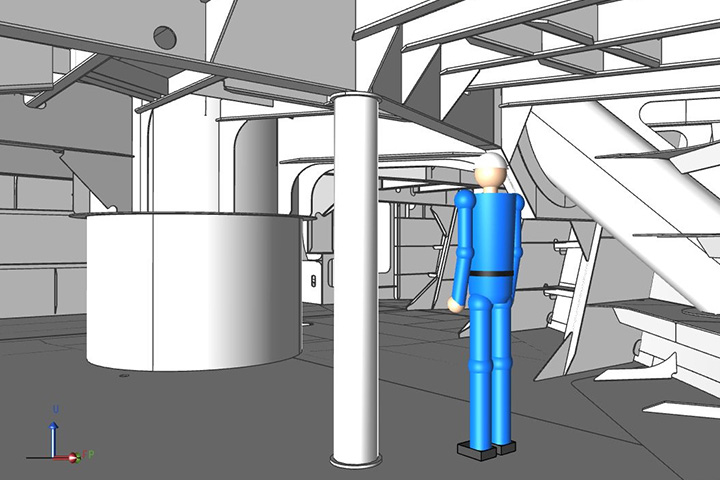 In the engine room, various equipment that becomes the heart of the ship are arranged, such as the main engine for the propulsion, the generator for electricity, and the numerous pumps. 3D CAD modelling is utilized to design these equipment and complex detailed piping such as fuel transfer line and cooling water line.